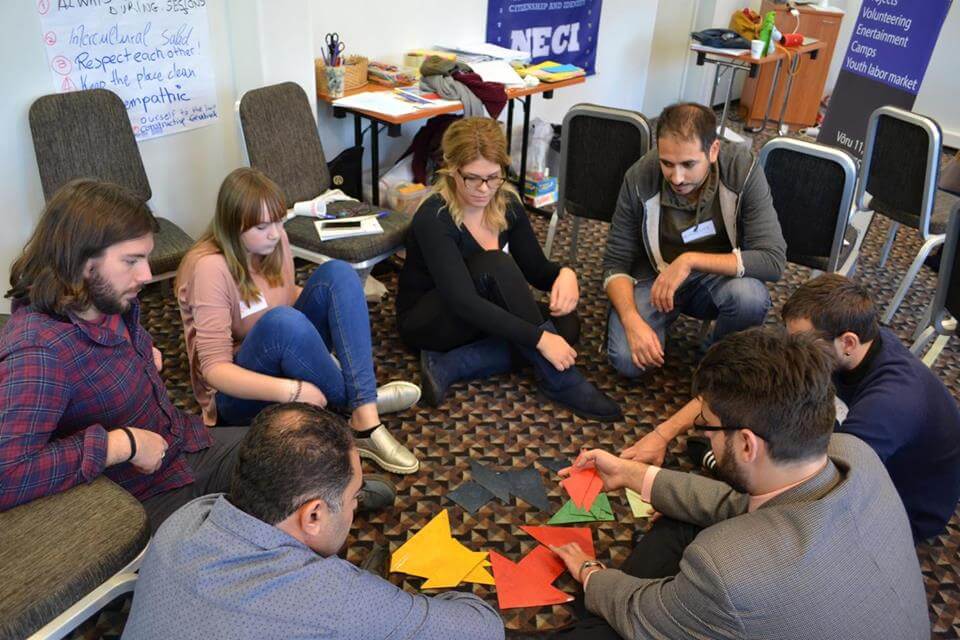 Participants: 18+ (youth workers, teachers, all of the people who are connected with YOUTH)

Group per country: 3 participants per country, 4 from Cyprus and 5 from Estonia

We spent the morning learning more about each other. We saw a presentation about our staff and found out about their work and hobbies. We played some name games and ice-breaking activities, also we had Team-building exercises. The highlight of this part was the golf game, involving all members as a big nice team.
After lunch break, we pinpointed our expectations and fears about the course, also sharing what we can contribute to the process. We learned about the objectives of the course (raising awareness of social inclusion, theatre as a tool of NFL, creating cooperation for future). We discussed the formal and non-formal learning, as well as social inclusion practices, that take place in each of our countries.
The day was concluded with reflection groups led by our staff members.
In the end of the day we had an intercultural evening.

Day 2: Discussing Social Inclusion.
We started day with some active movements, like dancing in pairs in different styles and touching different body parts, then proceeded to other body contact tasks (to have only specific amount of body parts on the floor). During these activities a lack of verbal communication was very welcome.

After reminding ourselves about the concepts of formal, non-formal and informal learning, we proceeded to discuss social inclusion. At first, we were given a selection of pictures which we discussed in terms of seeing soc. incl. practices on them. Then we had a ‘speed dating’ format discussion about several statements – one part of the team brainstormed the same statement with many people, and others were discussing a range of issues.

We brainstormed the prerequisites for social inclusion, then pinpointing those that we cannot directly control, the so called Factors X. The ones that we focused on today were
a) stereotypes/labels,
b) perception,
c) communication (three types of it: verbal, body language and paralanguage).
We did some tasks to understand more of these factors (i.e. stereotype issues – ‘walking through the park’ story, drawing a child vs drug addict, role-playing activity; perception – passing the information without words, and looking at context as a means to manipulate information; communication – taking up the roles to ‘help the young girl to cross the river’).

Of course, the highlight of today was completing the ‘golf’ task from the second attempt.
Also we had Second intercultural evening

Today was a day of something different: we went for a little trip to the Vikings’ Village!
In the village we had our two sessions. First focused on the Erasmus+ and everything connected to it. Thus, we learned about the priorities, based on which the applications for projects may receive grants (European citizenship, young people participation, cultural diversity, and involvement of youth with disabilities), aims of Erasmus+ – local (changing yearly) and ‘global’ (developing key competences, promoting intercultural communication, raising quality of youth work, supporting development of youth policy formation, international level of youth work development) and key actions (learning mobility of individuals, strategic partnership, support for policy report).

After the sessions we indulged in traditional Estonian meals, in some snow fights, and the bravest ones took a walk to the Blue Springs.

We changed our work location to the YCA palace. The day was devoted to exploring and debating collaboration as one of the Factor X of the social inclusion. Thus, first of all we ‘walked on the E-Quality street’, when we were given roles and, with aid of several questions, have sorted ourselves to different social status in the society. Interacting with others from same soc.status we have discussed why we are in this position, how we feel in it, and what can we do to improve it. Then three representatives of each class had an open discussion. The important lesson from this exercise was that social inclusion means improving the lives not only of ourselves, but of others too.

Next step, we were split for three groups. Togroups were given a society/community description and had to act accordingly in a simulated scenario of being stuck on the island and having to build a common shelter. Despite chaos in the beginning, we completed the task successfully on time. We’ve learned the concept of Venn diagram and were reminded about a common goal as something to facilitate collaboration.

The Nuclear Factory Debate was in order: the team was split into six smaller groups to play the roles of the Unemployed, the Environmentalists, the Youth Workers, the Investors, the Ministry of Energy and Finance resources, and the Community Counsel, to have a conference-type discussion about a proposed building of the nuclear power plant close to our village. Thus we’ve learned that, besides common goal and similarities, there are other factors that can influence the dynamics of collaboration, and collaboration is not as easy to reach when it’s not a life-or-death situation.

Our last big task of the day was the World Cafe, during which we debated several statement regarding social inclusion and role of youth workers, community, education and communication. We finished our day by reflecting via River of Life method. For tomorrow we were asked to bring three valuable things for the sessions

Today was the day to focus more on acting and less on speaking. The energizers played a role of introduction to importance of such aspects as attention, reaction, memory, coordination and so forth. Then was a time to soak in some theory (i.e. Stanislavski’s views and methods, as well as those of Grotowski).

The participants brought the objects that were of certain value to them and shared their stories with others. Then we put our most valuable object to the blanket, having a chance to later reposition or remove it. After that we proceeded to contact improvisation: first, leading a blind partner around the room, then keeping contact with chosen body parts changing either leader or the contacting parts, then letting a blind partner explore surroundings while protecting them from possible dangers.

After lunch we had a chance to be storytellers, and, blinded, to follow the story created for us by our partners. We later proceeded to synchronising walking/standing still, then were creating figures/shapes and adding or changing those. The following part was about dancing and performing – in fours or a whole group (following the leader), also creating a sequence of movements in pairs and then showing them as a mini-performance. The last part of that session was a pair work, where we had to figure out a key spot/point/movement to free our partners from uncomfortable positions.

The very last sessions focused on performance and improvisations ‘on stage’. First the viewers had a task to make the ‘actors’ laugh while the latter ones had to maintain the poker face. Then the actors were given the starting and ending point and had to create a story (beginning with one person on stage, then increasing the number of actors). Finally in groups of five we were creating and showing an episode/etude such that lack of speech/silence would be natural in our story.

We reflected on the day by giving silent thanks to other members of our team, then expressing our emotions about the day in a single gesture.

Today we were to put everything we’ve learned into practice working with a group of teenagers. But we started our morning with a mini-workshop by Eric which focused on the communication as a Factor X in the social inclusion. ‘brave volunteers’ were given some statements that they had to convince the audience in.

The brainstorming has began. People were sharing their ideas – first, in groups of fives, then all together. The process was long and tiring, but in the end having divided into smaller groups we managed to create something nice – messy, but nice.

Thus, we had two wonderful intro-entertainers who engaged the kids and divided them into three groups. The groups then worked in separate rooms for around an hour, creating a performance, which was later shown at the common stage. The event was concluded by two very interactive outro-entertainers.

After the kids have left, we have shared our emotions, also listening to what our observers had to say.

The day started with  giving a presentation about  work in the field of social inclusion in Romania regarding poverty.

We proceeded to work in country groups to brainstorm the ideas about dissemination of the project at the local level. The suggestions included: workshops with youth, presentation of newly obtained knowledge to other members of our organizations, spreading out information via social media.

Renos talked about process of planning a project. Currently prioritized topics were mentioned: intercultural cooperation, environment, social inclusion, tools for…, media, employability, refugees, healthy lifestyle, people with NEETS, coaching/mentoring. The objectives for the project should be SMART, and such points as key action, project type, venue, time, target group, and partners of collaboration were outlined. The participants then had to discuss in groups potential ideas for a project and then present it.

The after-lunch session focused on youth pass and developing eight key competences. In small groups the participants made a short episode to depict the competences, the discussion of each followed. We were prompted to make a reflection on a project based on the 8 competences.

Out final session was an evaluation of the whole process. First we revisited out expectations-contributions-fears tree to take off our expectation notes if those were fulfilled. The crown of the tree turned leafless. Then we completed a survey and with aid of several charts (i.e. pizza chart, objectives/activities graph, collective inbox) shared our thoughts and emotions about the project. The ‘cute’ evaluation part involved sharing gratitude to the project fellows and trainers.

We had a lovely dinner in the evening, with a sudden surprise visit of Santa Claus and his Snow Lady! For a little performance for Father Christmas each participant was given their Youth Pass.

This website uses cookies to improve your experience while you navigate through the website. Out of these, the cookies that are categorized as necessary are stored on your browser as they are essential for the working of basic functionalities of the website. We also use third-party cookies that help us analyze and understand how you use this website. These cookies will be stored in your browser only with your consent. You also have the option to opt-out of these cookies. But opting out of some of these cookies may affect your browsing experience.
Necessary Always Enabled
Necessary cookies are absolutely essential for the website to function properly. This category only includes cookies that ensures basic functionalities and security features of the website. These cookies do not store any personal information.
Non-necessary
Any cookies that may not be particularly necessary for the website to function and is used specifically to collect user personal data via analytics, ads, other embedded contents are termed as non-necessary cookies. It is mandatory to procure user consent prior to running these cookies on your website.
SAVE & ACCEPT